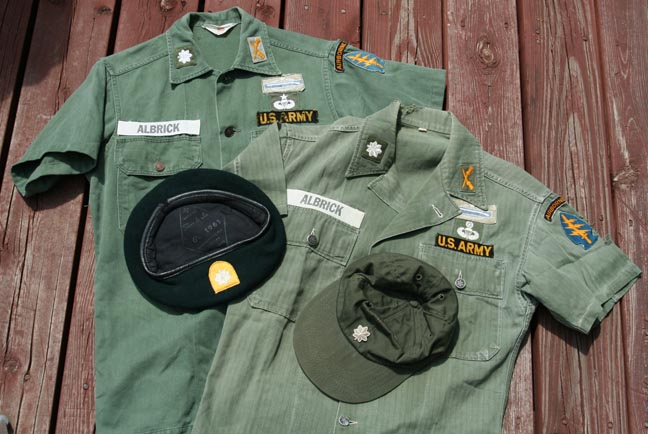 His uniform items are from the period when Albrick served as Detachment Commander for MTT (Mobile Training Team) Laos during “Operation White Star” (sixth rotation) from 10/15/1961 – 04/13/1962.  Albrick is listed as a Major for this assignment in “Who’s Who From Hotfoot / White Star” by Stephen Sherman, but I verified with Sherman that Albrick was actually a LTC (Lieutenant Colonel) before leaving for Laos.

Both utility shirts are half-sleeved which was commonly seen in Laos.  One shirt is HBT (herring bone twill) and the other is Sateen material.  Both shirts have metal “13 star” buttons as seen on WWII HBTs.  Both shirts have CIB’s (Combat Infantry Badges) with 1 star for combat in WWII and Korea.  Albrick received his 3rd CIB for White Star later on 8/14/1963.

His ball cap is Okinawa-made and his beret is a scarce 1961 dated Fleur Di Lis with a unique Okinawa-made flash.  It is slightly smaller than typical flashes and has the rank directly embroidered on it.  The flash is machine sewn to the beret.

In addition to being a soldier and educator, Edgar Albrick was a poet.  Below is one of his poems.

How Is Time Affecting You?

The lines in your face grow deeper.
Are you smiles further apart and few?
Are your pains more frequent and lasting?
How is time affecting you?

Many have departed at an early age.
We continue to drop along the way.
How are you reacting to this human pace
Since God allows you to stay?

We watch the young grow and develop
We envy their youth every day.
I hope none of you feel sorry about life
If you didn’t do it your way.

Experiences we try to pass on
To our successors whoever they may be.
But the trip that was made
Can never be replayed; it was made by me.

Our thoughts grow ever deeper
To God, his home and our fate.
We can’t help but keep on thinking
This trip in our future will be great.