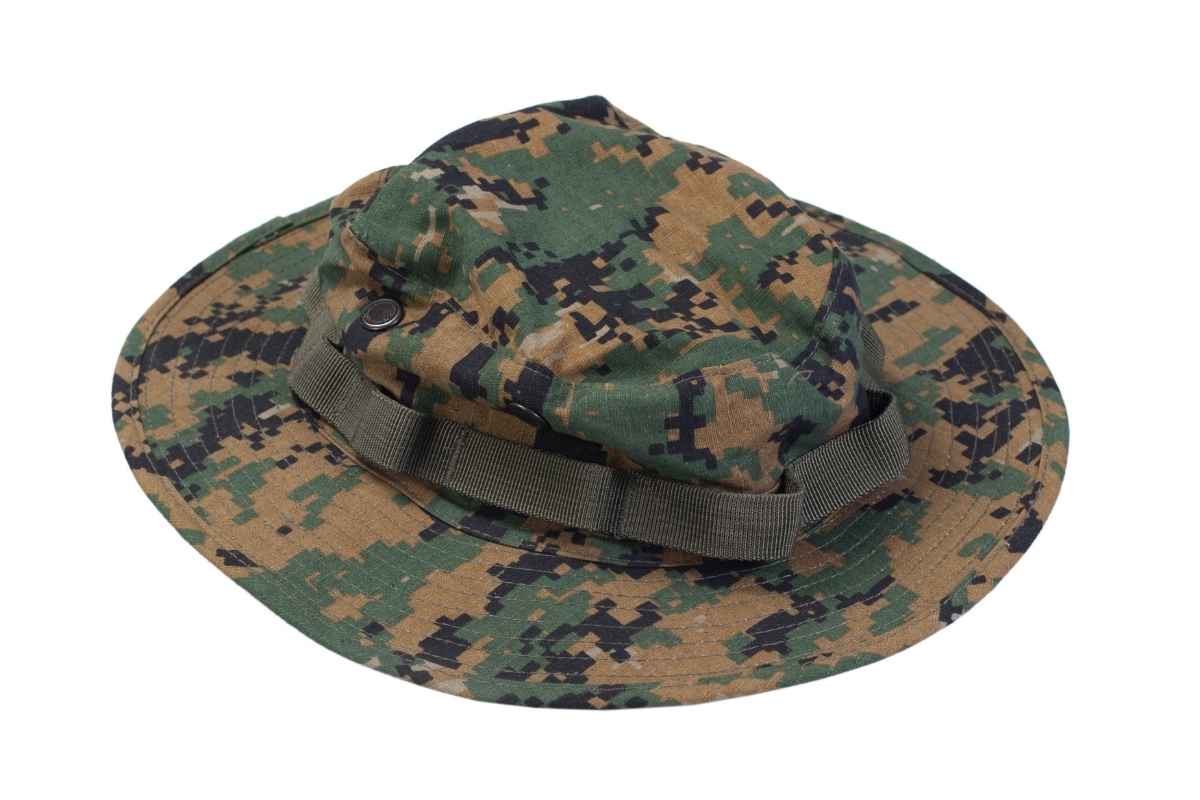 Boonies hats were often the preferred piece of headgear in the tropical climates of Southeast Asia. Wool berets were often described as being inconvenient and uncomfortable because they were hot, they did not breathe, and they took forever to dry. Many vets say that their berets were only worn while they were being photographed and that they were seldom worn in the field.

This is a classic example of the low crown, wide brim tiger stripe boonie. It is commonly referred to as the CIDG (Civilian Irregular Defense) pattern because it is commonly seen in photographs of SF advisors and CIDG personnel. Boonies, as well as tiger stripe shirts and trousers were made from textiles procured from sources such as Japan, Hong Kong, Korea, and Taiwan through MDAP contracts (Stanton, 1989). This beret is done in a JWD (John Wayne Dense) pattern in heavy-weight fabric (Johnson, 1999). It has two small vent grommets on each side of the crown. Examples often have a .25″ silk tag that marks the hat size. I have seen CIDG boonies lined in black, green, or gray cloth.

The tiger stripe boonie featured above has a tall crown and a wide brim. The pattern is Advisor Sparse, or “golden tiger”. The fabric is a lightweight material (Johnson, 1999). There are two tiny metal vent grommets on each side of the crown. On inside of the partial liner, there is a faint size stamp marked “M-3/4”

This is a salty boonie. It is tailor made with a tall crown and a short brim. It has been made from several different patterns of tiger stripe material including: Vietnamese Marine Corps Dense (VMD) pattern on the top of the crown, Advisor Dense (AD) pattern on the brim and band, and John Wayne Dense (JWD) pattern on the side panels (Johnson, 1999). The boonie is very sun bleached, resulting in purpling color distortion.

This is a government issue OD tropical boonie hat in rip-stop material. It is dated 1969 and would have originally been issued with an insect net. Post war boonies will have green tags as opposed to the white tags present in this one.

This is another variation of the CIDG pattern tiger stripe boonie in JWD (John Wayne Dense) heavy weight material (Johnson, 1999). It is lined in faded green cotton with writing of an unidentified language inside. I suspect that this symbol-based writing is Montagnard. The foliage band has been removed, leaving a prominent line where the material under the band is less sun faded than the rest of the boonie. There are faint remnants of a size tag (see upper right image). The eyelets are rusted, which is common on well worn tiger stripe boonies.

This is a government issue tropical boonie in the predominant green “lowland” ERDL pattern. The material is rip-stop. The boonie is dated 1969 and was not issued with an insect net.

This is an NVA/PAVN issue OD “flop hat” with chin cord. The crown is insulated with thick plastic between cotton layers. There are three white metal vent grommets arranged horizontally on each side of the crown. Some NVA variations will have the three vent grommets arranged diagonally on each side of the crown. Although these are PAVN (Peoples Army of Vietnam) issue, there is documentation of SOG and Roadrunner teams wearing this headgear to disguise their profile while on recon (Conboy & Bowra, 1991; Plaster, 1997, 2000; Stanton, 1985).